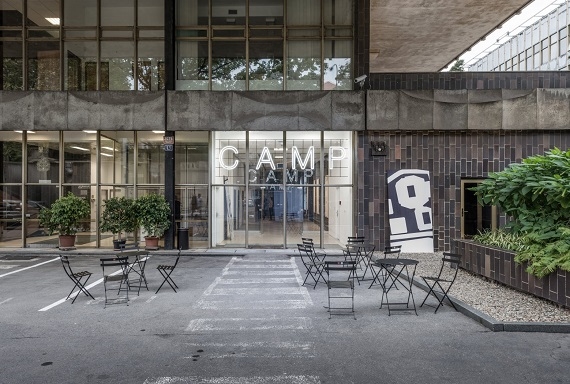 Walking around the three glass mushrooms levitating in the centre of Prague just minutes from the Charles Square leaves one with a distinctly dystopian feel. The Karel Prager designed buildings from the early 1970s don’t exactly emanate a modern feel. But walk through the bright white neon that spell the letters C A M P and you will find yourself in a parallel universe.

CAMP, or Center for Architecture and Metropolitan Planning, is a brand new space that has a fairly straight-forward goal. “We want to show people the future of Prague and present projects that will change the face of the city,” explains Adam Gebrian a self-professed architecture fan and one of the authors behind CAMP, while sipping a cappuccino at the third-wave espresso bar near the entrance to the gallery.

Just behind him looms an empty 300 sqm hall dominated by a 25-metre-long projection wall that divides the space into two. The screen will be used to present various projects—from private development projects and the results of architecture competitions, to street revitalisations and brownfield development studies—in the form of moving 8k graphics.  Images from drones and time-lapse recordings of life in the streets will thus also be part of exhibitions held there.

“Being able to show places in 1:1 scale allows us to present the city in a much wider context,” adds Gebrian, as he looks over an video of a drone flying over one of Prague’s derelict former industrial rail yards. The aim is to ensure that the residents of Prague don’t feel left out of processes that will influence the future appearance of the city they live in.
On the other side of the projection screen you will find a kind of chill out zone that includes bookshop focusing on publications about the city, architecture and urban planning. CAMP also houses a modest lecture hall, which will be used for discussions, film screenings and workshops focusing on architecture, urban planning, and public space.

CAMP is open daily, except for Monday, from 9 AM to 9 PM.

Tomorrow! The @LoebFellowship explores how practitioners in the built environment can pursue activism while balanci… https://t.co/BSjVkzuAqQ
November 9
Congratulations to Pascale Sablan AIA, named President Elect of @NOMArchitects. AAO is pleased to welcome Sablan as… https://t.co/DqZvzYitmm
November 4
The Future of Open Green Space: on 11/12, the third session of the Future of Open Space series from @MASNYC will e… https://t.co/gJhAQSBm9P
November 4